(Translated from Norwegian from Aftenposten newspaper)

What on earth do you want to be when you grow up? And who are you going to ask for advice? A new podcast may give you some answers.

Calin Fabri has a degree in engineering, but also wondered if he should study to become a lawyer.

But, what does being a lawyer really mean? That I need to find out, he thought.

-“The problem was that I couldn’t find any information about that. I went to Utdanningsmessen (an event where Universities try to recruit students. Education/Career day) here in Oslo, but honestly- there you will mainly meet people who wish to “sell” their university or college, and believe that the education they offer is the best.”

Little help available at school
Calin Fabri wanted to find out what other students thought and began to interview students who were almost finished with their last year in high school. After having spoken with more than 100 high school seniors, he found out that very few knew what they wanted to be and that the majority of them meant that the career counseling their school offered was bad.

-“Because I enjoy listening to podcasts, I quickly figured out that it would be a great idea to create a podcast where people of different occupations talk about what they do at their job. What does a day in the life of a lawyer, doctor or teacher look like? What do you have to do to become one, and what should you expect in the future if you decide on that career path?”

Worth noticing
Calin Fabri has been a part of the start-up world for almost two years. The digital career guidance-podcast was launched this year, in February. Two months later, it could be found on the front page under “New and Noteworthy” in iTunes.

While working on the podcast, Calin realized that he required help to fulfill his project. He then made a post on Facebook to find someone who would be interested in working with him – Alex Schulz Phuljung reacted spontaneously. “This I would like to be a part of!” he thought.

-“I know that the career counseling that is given in a lot of schools isn’t that effective and thought that Calin had a great idea”, says Schulz Phuljung.

The 21-year-old is, unlike Calin, born and raised in Norway and has his schooling from here. Fabri is originally from Romania and came to Norway for the first time as a graduate engineer five years ago. The 27-year-old now speaks Norwegian fluently.

The podcast is however in English – and they have therefore been able to reach out to listeners in more than ten countries, including the US, China, and Peru, they say.

An informal, helpful chat
-We believe that we are making a product that is very helpful. We want our listeners to get a realistic picture of what different occupations entail.
When you’re around the age of seventeen and want to become an architect, for example, you may want to have an informal chat with an architect to get an idea of what it is like to work as one. But there are no seventeen-year-olds who do that.

When Fabri interviews people from different occupations, he asks questions that he believes a lot of people have.

-And there is always one question we always ask: “If you could give your 18-year-old self an advice, what would it be?” When we ask that question, the interviewee becomes very attentive and personal.

Calin Fabri and Alex Schulz Phuljung have no difficulties finding people who want to be interviewed for the podcast. They have a large network in several countries, thanks to a wide range of friends and friends of friends. In addition to this, they are both members of Toastmasters International (a club that focuses on the improvement of communication and public speaking).

A guest scoop
-“We are still in the development phase, but have several exciting projects underway”, says Fabri. -“We are already offering live webinars where one can connect with a mentor to whom they can ask questions and get advice from. Furthermore, we are working on a pilot program where we give students the opportunity to take a personality test to give an idea of what careers might be right for them, based on their own personal interests, skills, and strengths and weaknesses.”

-“We want to give them suggestions based on their results, while at the same time we will not discourage anyone to pursue a dream career. Instead, we will give them advice on how they can reach their goals”, says Alex Schulz Phuljung.

They have named their website and podcast 99 Career Options – and are frequently updating the site with new information and interviews.

The two entrepreneurs are especially looking forward to the 6th of July. That is when Kevin Kelly will appear as a guest the on the podcast to talk about education and share his life story.

If you are wondering who Kelly is, he is the founder of Wired Magazine.

“He is great”, according to Calin. “Really great!”, Alex supplements. 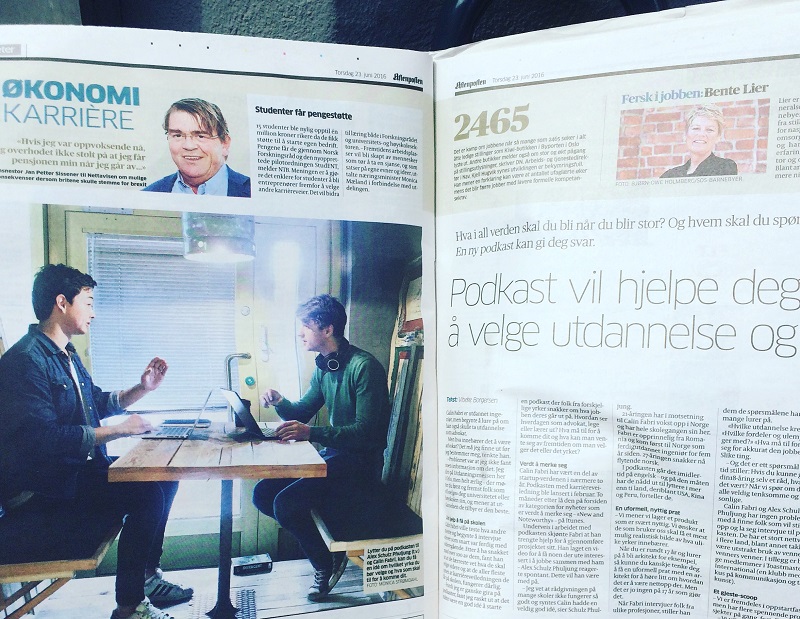 A couple of days ago, we met with Aftenposten to give a chat about 99 Career Options. They were very interested in learning about what we do, and we explained to them how we can help high school students with our program.

Now, a couple of days later, we can proudly say that we finally made it into the news! We cannot express how grateful we are for your support. Without you, this would not have been possible!

This is a great milestone, but we promise not to stop here.  We will continue to do our best so that you can get all the information you need to know when picking a career path!

Thank you so much for making this possible! Let´s keep moving forward together! 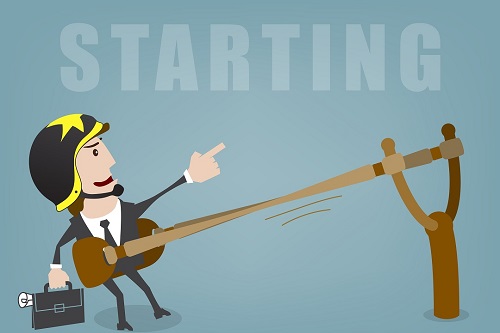 Not sure what job or career path to choose? The world is changing at a rapid speed, and with new jobs continuing to emerge on the market, getting the best information on the different opportunities available becomes crucial. With thousands of different career options to choose from, you can be absolutely sure that there’s one out there that will be a perfect fit for you. If you’re on the lookout for a job that might be ideal for you, here’s a END_OF_DOCUMENT_TOKEN_TO_BE_REPLACED